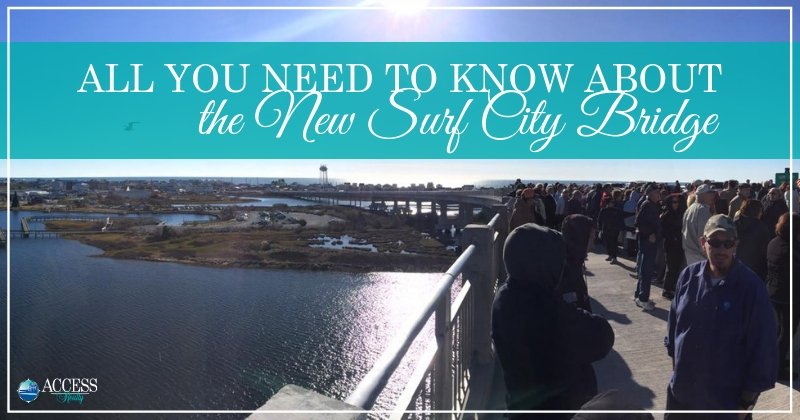 As you drive over the bridge onto Topsail Island, NC for your beach vacation, you’re going to notice that things have changed quite a bit from last summer. The old historic swing bridge lives on in our memories but not in its usual location.

(You can watch a short video clip of some of the final stages of the Surf City swing bridge demolition here.)

Instead, you’ll be driving over the new Surf City high-rise bridge—and taking in some pretty fabulous views as you do. Here’s what you need to know about the new bridge and what it means for your Topsail, NC beach vacation and how it affects you getting to your Topsail Island rental.

The Surf City Bridge opened ahead of schedule late last year, which is really good news for you (and for those who of us who live here and drive over it every day). The new 65-foot-high, $53 million Surf City Bridge represents an improvement over the old swing bridge it replaces, as the swing bridge forced motorists to wait numerous times each day so the bridge could be opened to allow boats to pass. Traffic now can move continuously over the bridge as boats pass underneath. Faster, more efficient access to Topsail Island and its beaches? Oh yeah! We approve.

The bridge was originally scheduled to open in September 2019. But crews with NCDOT and Balfour Beatty Construction worked with the local community to accelerate the construction of the much-anticipated bridge so it could serve the community sooner. So that’s exactly what happened, with the new bridge opening 9 months ahead of schedule—which is pretty impressive (not to mention unheard of) when it comes to a massive construction project such as this.

After the opening ceremony, the Surf City Bridge became open to the public at 10:30 a.m. on Tuesday, December, 2018. Local officials led a vehicle procession across the 3,773-foot span between Topsail Island and the mainland for its inaugural run.

The new bridge also boasts 7.5-foot bike lanes and a 10-foot wide multi-use path, so there is a lot to love about the new Surf City Bridge and its user-friendly upgrades.

As they say, the rest is history. Oh and did we mention the panoramic views? Get your camera ready!

You can read more about the Surf City Bridge project on the NCDOT page.

Have you driven over the new highrise bridge in Surf City? What did you think? We want to know! Our comment section is always open and we love hearing from our readers.